The scale of illegal wildlife trade problem has become so massive and devastating that it has been proclaimed the second largest hazard to biodiversity, along with deforestation and habitat degradation. Increasing demand for alternative medicine, including traditional Chinese medicine, among the growing middle class in China, other Southeast and East Asian countries have resulted in increased pressure on wildlife species, bringing endangered species to the brink of extinction.

Illegal trade in tigers and their parts remains one of the main challenges to securing a global wild tiger population despite many years of effort in tiger conservation. Various practices and approaches have been employed on global and national levels, however, it is still not clear which measures have had the most significant impact. For the last twenty years, Amur-Heilong has remained a transborder region with one of the most viable and stable tiger populations despite the unabated level of Amur tiger poaching and smuggling across the Sino-Russian border.

This research analyses global and regional practices to address wildlife crime in cases of tiger related crime. From the global perspective, the research employs various methods to analyze the implementation of a tiger related agenda within the context of CITES as the most pertinent global policy tool, as well as takes stock of the best practices and challenges of the tiger range countries to address the problem on the ground. 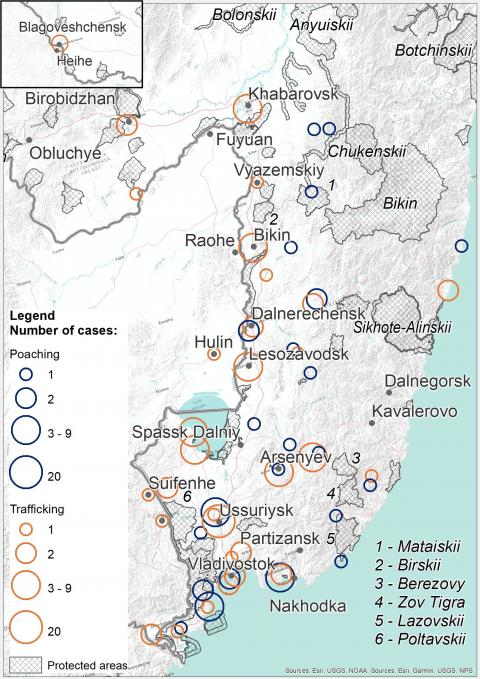 With regards to regional analysis, the research focuses on the Amur-Heilong transborder region. The work covers Amur tiger conservation efforts taken in Russia and China, focusing on the problem of tiger poaching and illegal trade, its drivers and measures taken by both countries to address the problem. The researcher uses a mixed methods approach, including such research techniques as spatial analysis, tiger seizures analysis, field wildlife market surveys and application of the holistic indicator framework to answer the formulated research questions. The findings indicate that successful collaboration of law enforcement and nature conservation agencies coupled with stronger penalties and adequate legislation are the main components in addressing the problem of tiger related crime, despite existing challenges and ongoing illegal wildlife trade along the Sino-Russian border.