Starting from the puzzling under representation of adult females evident in early medieval cemeteries in Italy, this project focuses on the matter of gender discrimination and mortality during the Middle Ages. Curiously, the invisibility of women is not the case for either late Roman cemeteries in Italy or in a sample of early medieval cemeteries excavated in Central and Northern Europe. Seeing these differences the project proposes to investigate a wide range of sample areas within Europe. Since the problem of women’s under representation may be resolved in a number of different ways (it may be as much connected to the inaccuracy of the cemeteries in representing a living community as to the use of  different funerary practices or unusual mortality trends among women), also the methods and the research directions will be necessarily multifaceted. Using the data of past and present excavations throughout Europe and with the help of Geographical Information System, the aim of this research is to explore visible funerary habits and population and to place the findings into their social and cultural contexts.

Barbiera and Dalla Zuanna, while conducting empirical research on mortality trends in Italy during the middle ages, gradually began to realize there was something enigmatic in the particular traces of the past under review: women were routinely underrepresented in the cemetery sample. Low representation of adult females in cemetery populations has been systematically established in a wide sample of large cemeteries dating from the 6th century AD until the 16th century in Italy. In particular, between the 6th and the 9th centuries, the mean sex ratio was 171 males for every 100 females, while later, from the 10th until the 16th century, the mean sex ratio was more balanced, with 151 males per 100 females (Barbiera 2008 and Barbiera, in press). These figures only pointed to an adult sample since the sex of an individual younger than 15-18 cannot be determined (hormones that produce sex differences are not present). Given the close to 50:50 normal male-female distributions in human populations, why were females so under represented for so long in the cemeteries?

Since preliminary studies have revealed different trends in terms of sex ratio visible in medieval cemeteries in different areas of Europe, it seems very appropriate to comparatively consider this problem in a wider European context. For this purpose a suitable sample region have been chosen, extended in Central Europe, including nowadays Italy, Slovenia, Croatia, Austria, Hungary, Germany, Switzerland, France, Belgium and the Netherlands. The chronological span of our investigation ranges from the 1st until the 14th centuries A.D.
The following questions:

The more general aim of this project is to investigate which are the reasons for the distortion in the sex ratio in Italy and whether it was related to high mortality of young females in the Middle Ages. Documentary sources are scarce, and thus archaeological remains are the primary data. Bio-archaeological and archaeological sources from several European regions will be used to elucidate and compare attitudes towards the deaths of males, females, and children, mortality trends and living standards.

First, a wide sample of published skeletal material dated from the Roman until the later medieval periods has been collected in the selected area in Central Europe. Although there have been prior attempts to consider in a comparative way the results from different cemeteries, they normally have taken into account only few samples (Giovannini 2001). All the collected data was integrated into a database, which included all the information available for each cemetery (number of individuals buried at different age at death, number of males and females, number of individuals not analyzed, sexual dimorphism, ergonomic traits, high length of the individuals, types of pathologies identified on male and female skeletons). From this data the values of D and of the sex ratio were estimated for each cemetery.
The data from 168 cemeteries has been analyzed.

The database was analysed using ArcGIS Desktop 9.3.1 software package, which allowed spatial analysis of the sex ratio and mortality indicators in different geographical regions. Finally, the data have been represented for the following time periods: 1-5 centuries, 6-9 centuries, 10-13 centuries and period after 14th century.
Sex ratio values were classified into 4 categories, which indicates the proportion of males and females calculated as the number of males every 100 females. Normal values of the sex-ratio should are 105 males for 100 females: 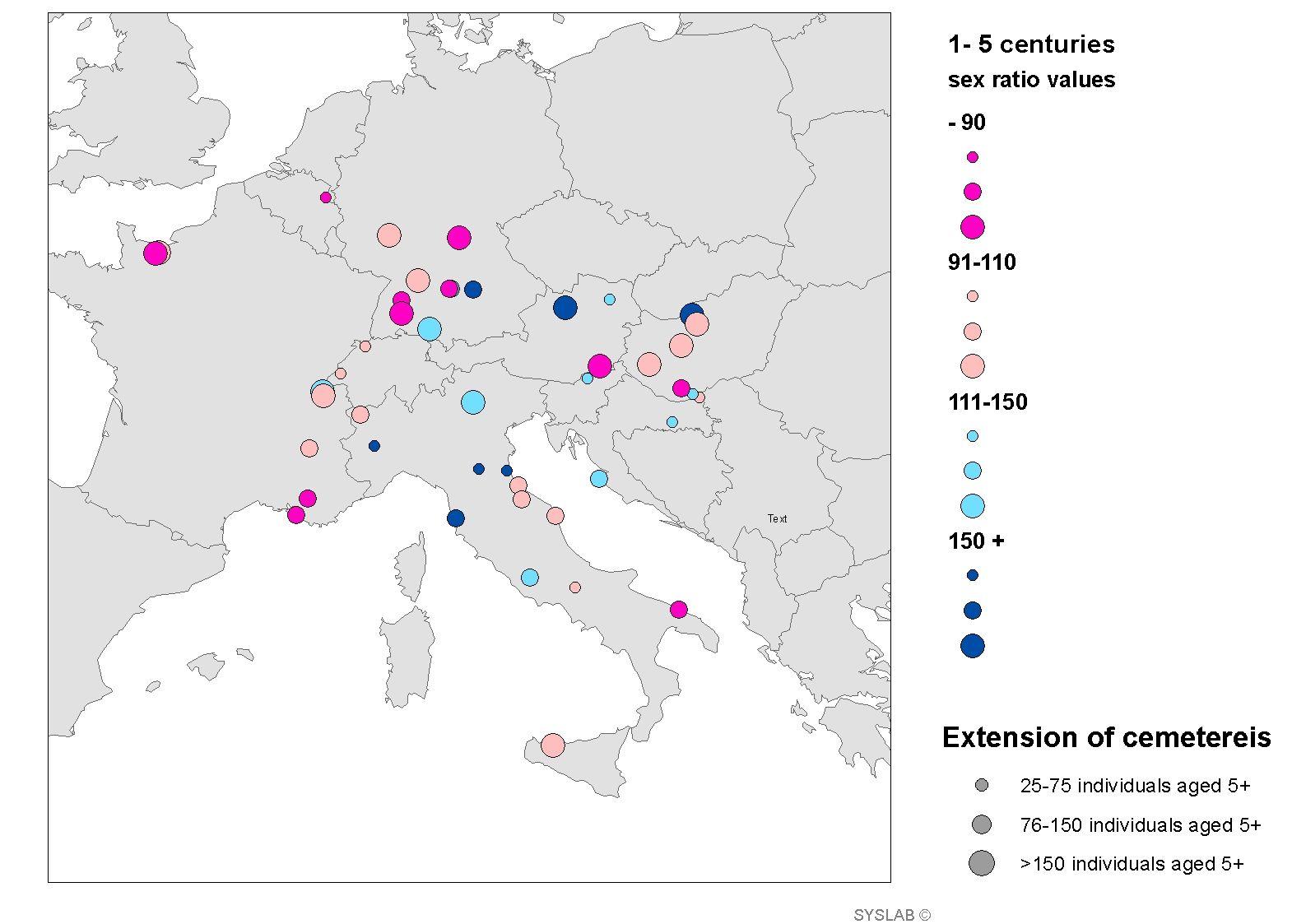 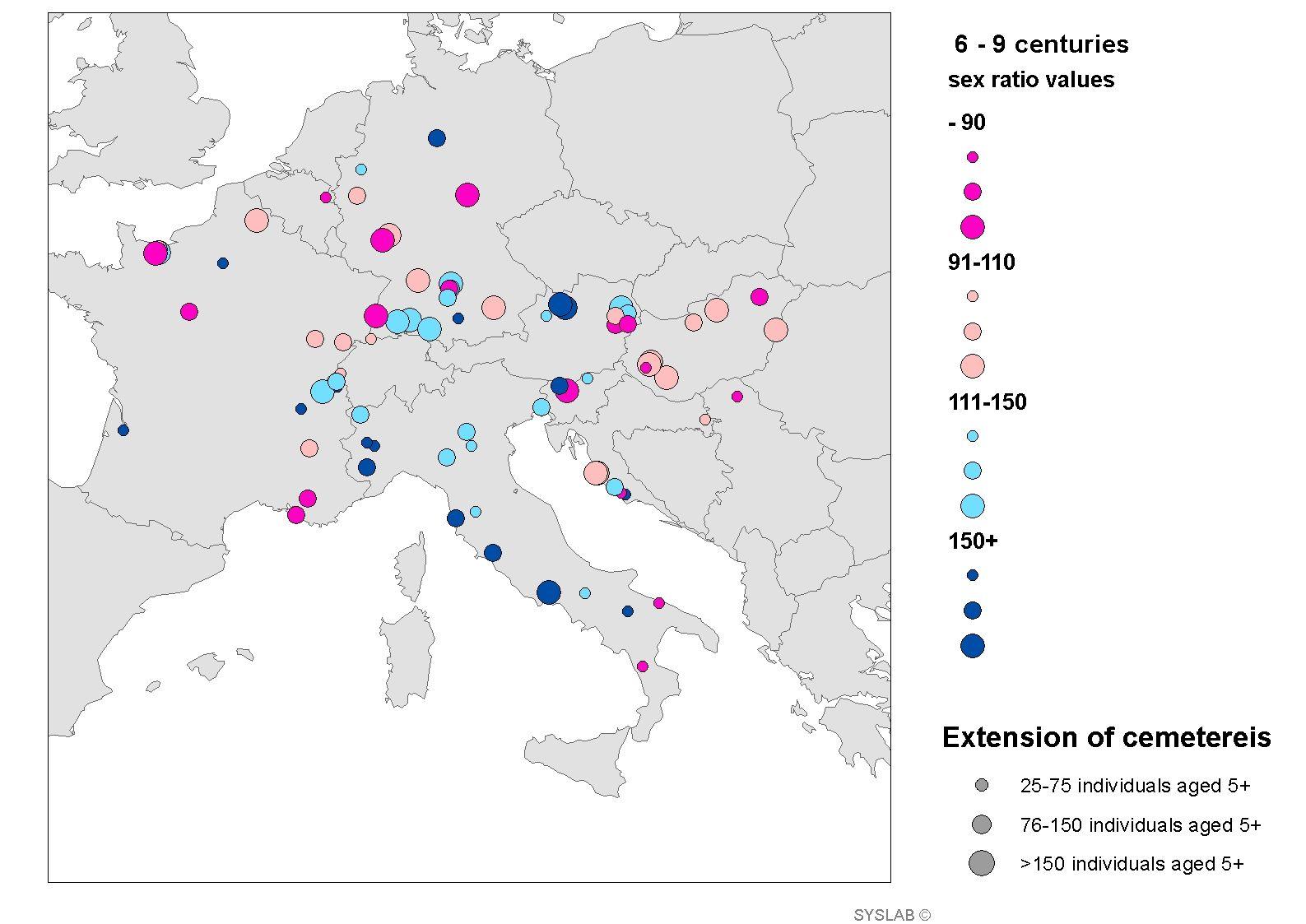 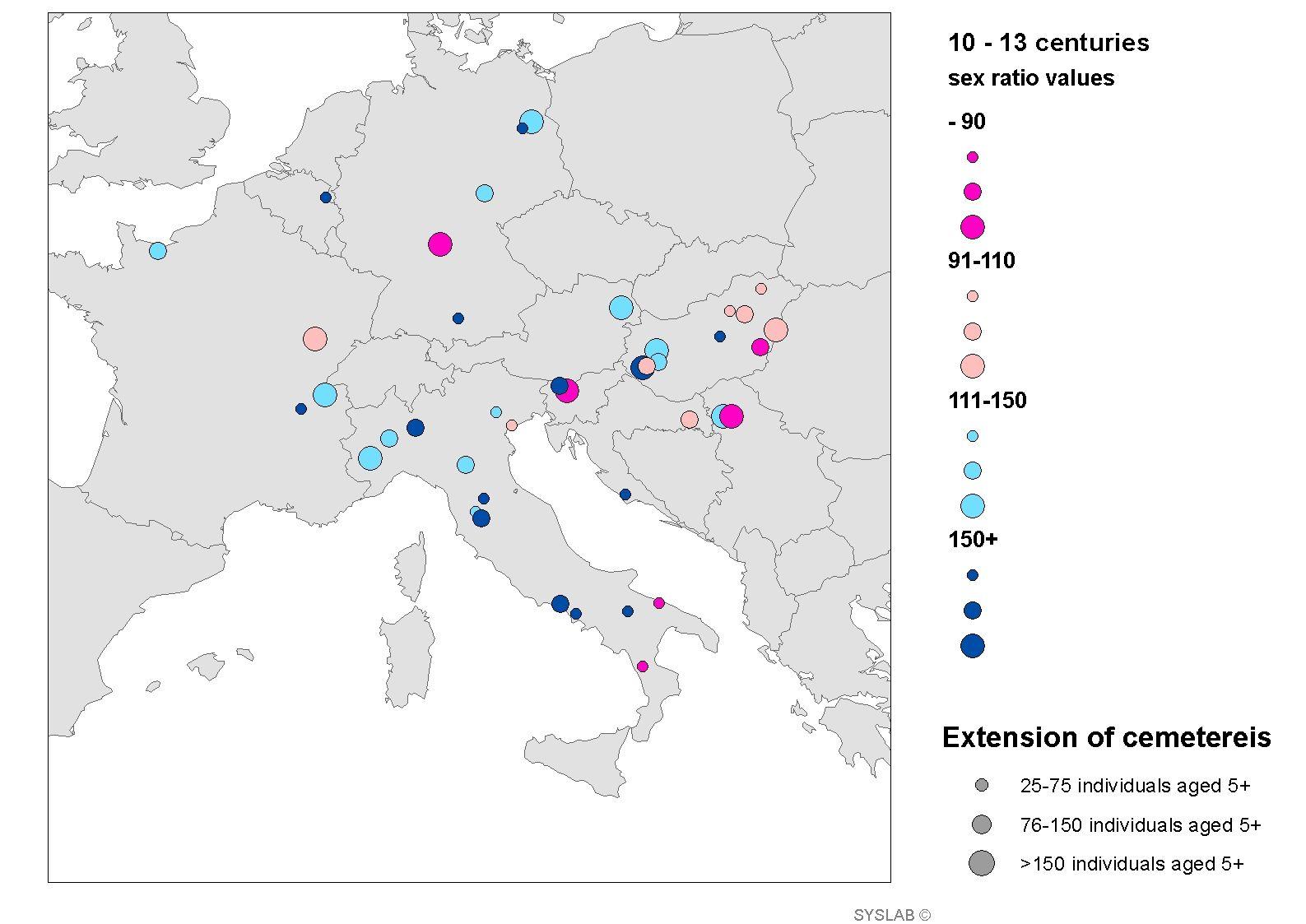 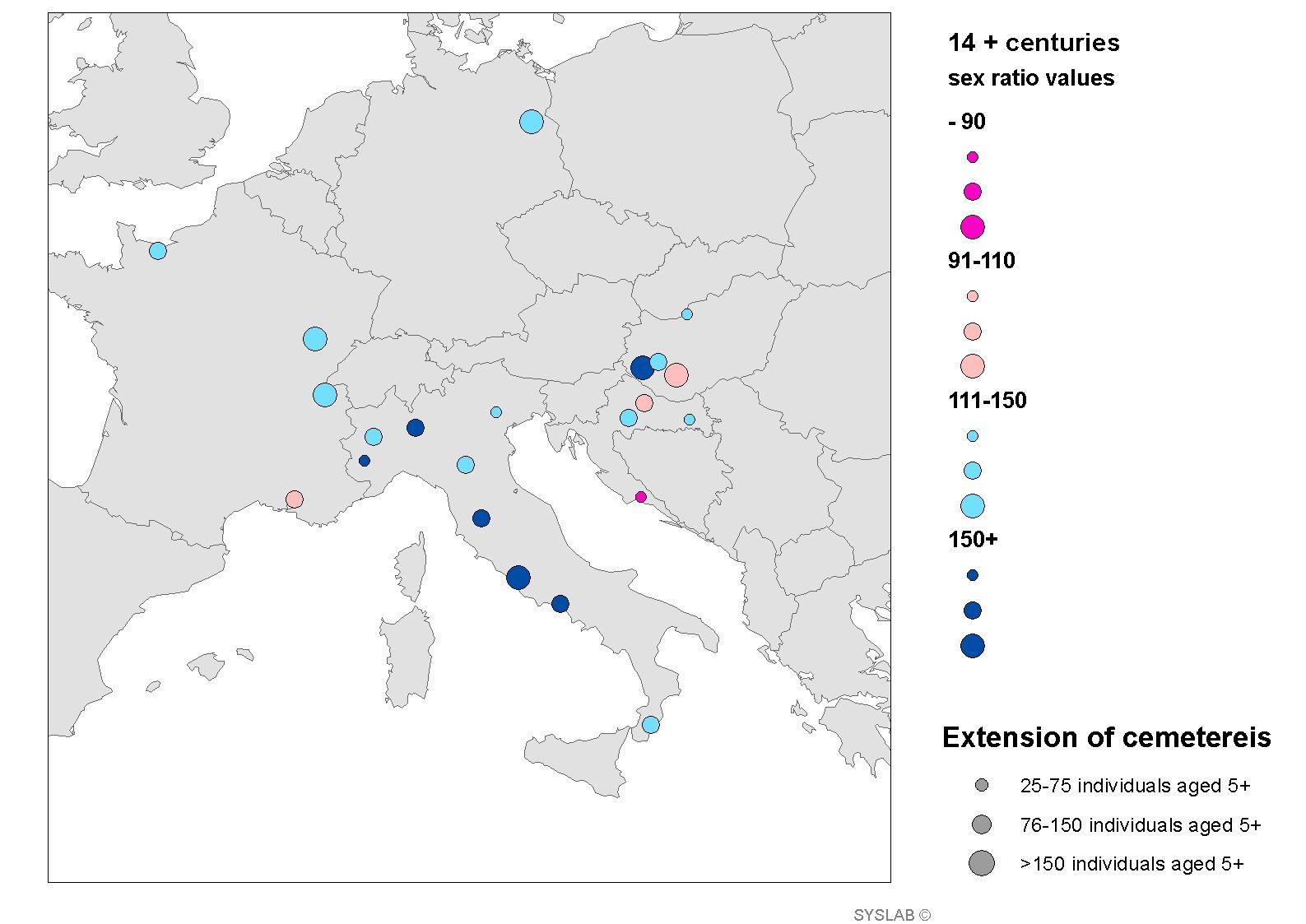 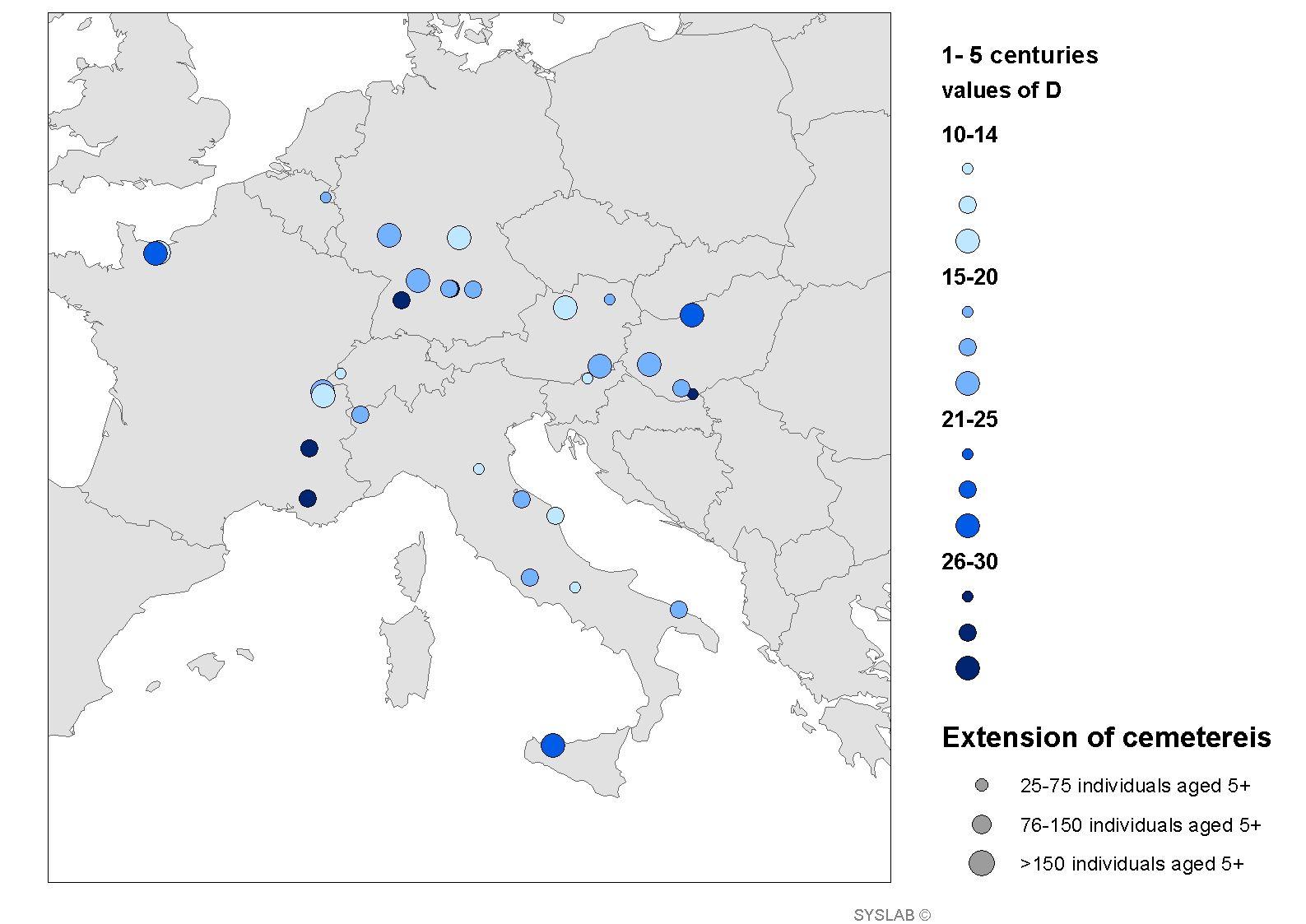 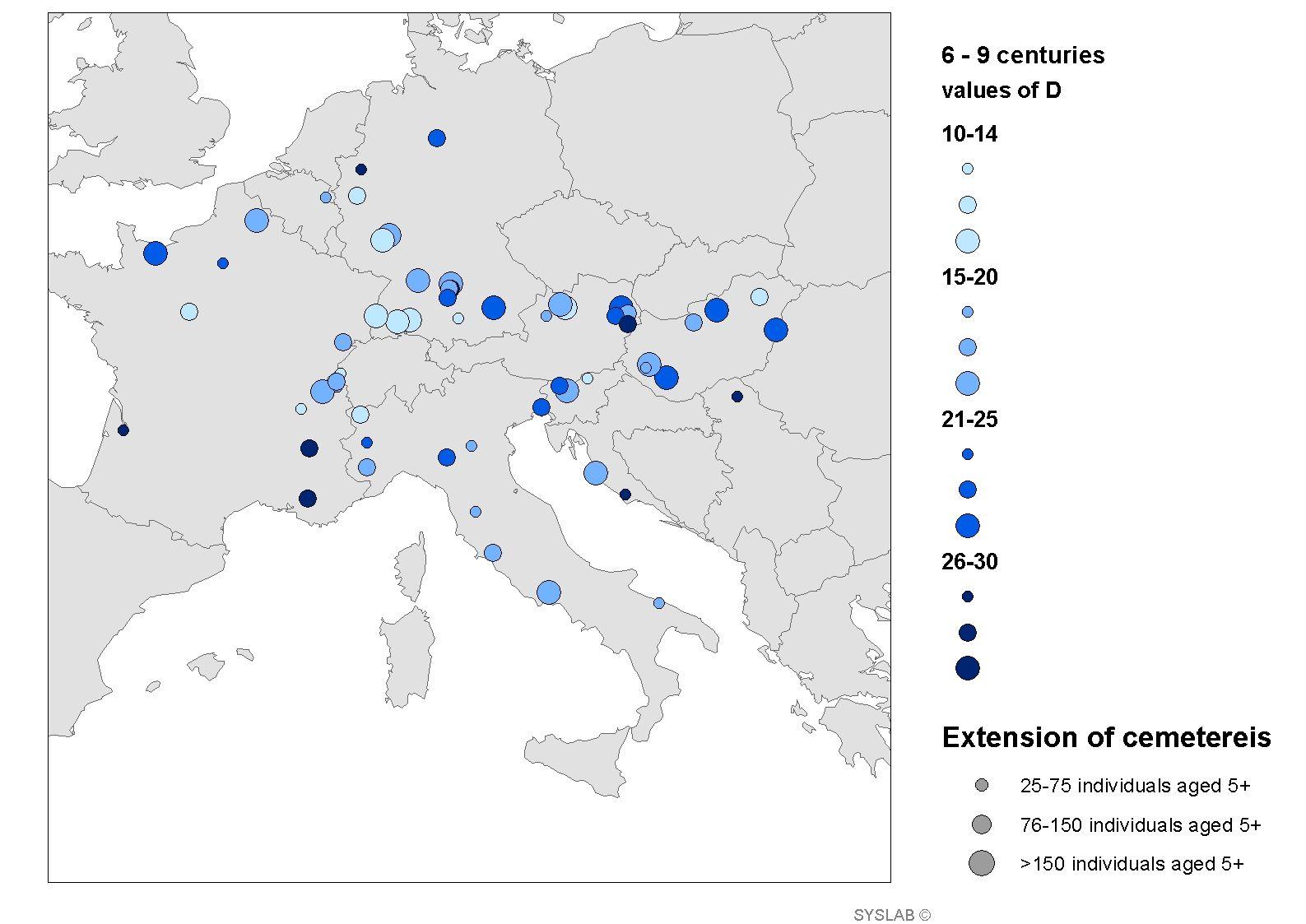 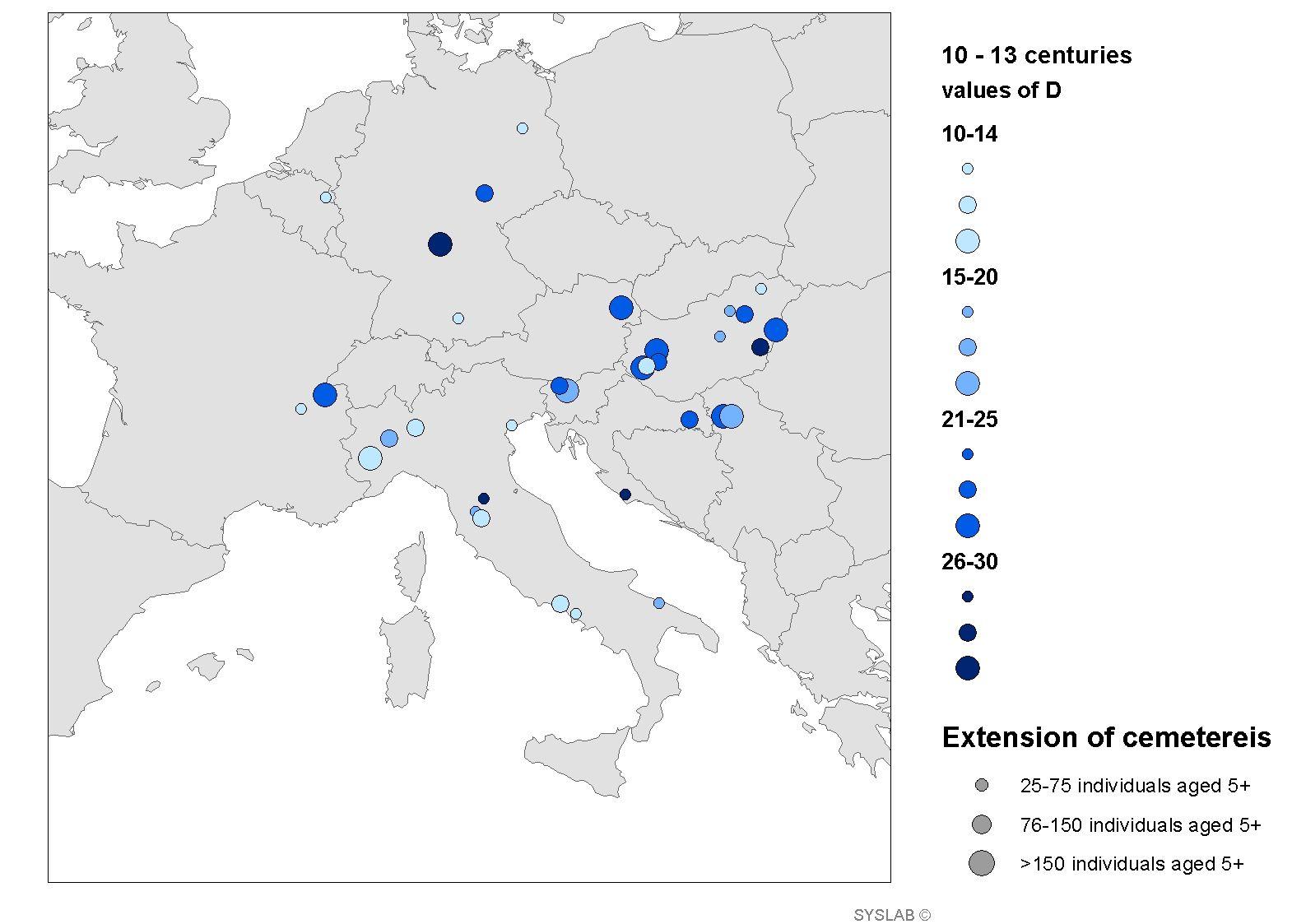 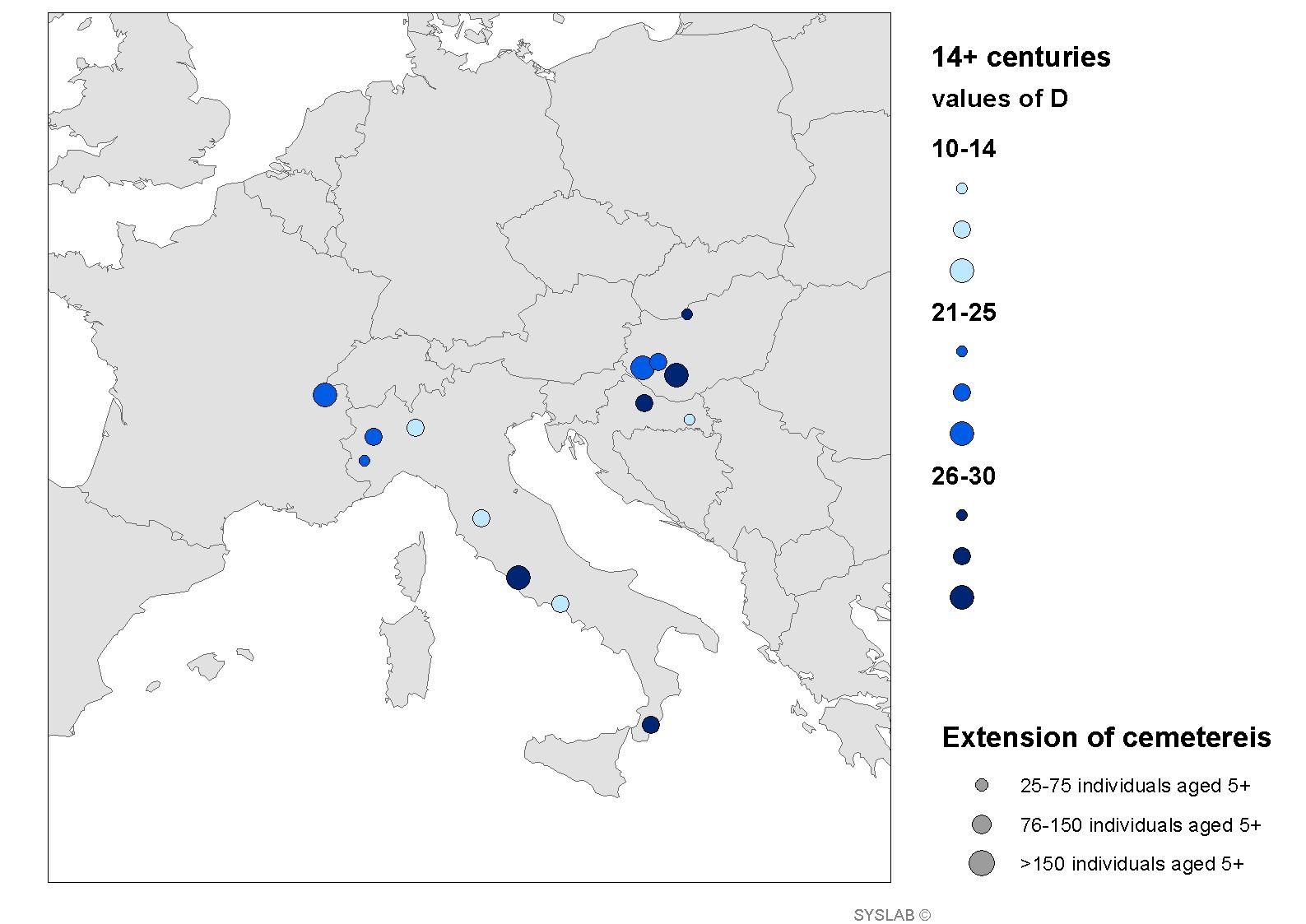 The project is still ongoing so definitive results and their interpretation will be available later on. The set of the data with GIS was an important starting point for the interpretation of the data. As preliminary conclusion we can say that the distorted trends of the sex ratio visible in Early Medieval Italy have not been found in the other regions of Europe considered. On the other side, the values of D (connected to mortality) preformed similar results during the Middle ages in the different areas under study.

Additional comparative aspects have emerged that compound and make the puzzle particularly intriguing:

1.      Such unbalanced values in the sex ratio are not visible in Italian cemeteries dated to Roman times and late antiquity.
2.      A preliminary research in medieval cemeteries in Central Europe (Germany, Austria, Slovenia, Hungary and Czech Republic) has shown that the sex ratio was close to the expected figure, showing almost equal numbers of males and females.
3.      It was possible to demonstrate that the lack of female skeletons is not related to some methodological problems of the anthropological analyses
4.      It was also shown that the high proportion of males in cemeteries was not a consequence of the immigration of barbarian warriors from the North of Europe
5.      It was not possible to demonstrate that women were subjected to segregation in terms of burial placement or that they were missing because their bodies were treated according to special funerary rituals which made them archaeologically invisible. Our present knowledge of archaeological data and written sources do not allow us to make this assumption: simply put, no written or archeological source documents it. So, even though this hypothesis cannot be excluded, it also cannot be proved at present.
6.      Mortality trends in Italy showed that the values of d = D5-19/D5+ (D 5-19 is the number of skeletons of persons estimated to be aged 5-19 years, and D5+ the number of skeletons aged over 5 years of age, see Bocquet-Appel and Naji, 2006) were higher in the cemeteries dated to the period between the 6th and the 9th centuries, in contrast to the lower values of d found in earlier and later cemeteries (Barbiera, Dalla Zuanna 2009). This means that in the early medieval Italian cemeteries investigated, where female adults were missing, the number of buried individuals between age 5 and 19 was higher than in earlier and later phases. This value can be attributed to an increase of mortality of younger individuals and/or a very young population structure (Barbiera, Dalla Zuanna 2009).